The fourteen ambitious chartering members had the drive, dedication, skills and knowledge required to promote and implement their goals to make a difference in the community and represent Zeta Phi Beta Sorority Inc. in only the highest ideals.

The first initiates of Tau Eta Zeta Chapter were Oluyemisi Adekunle, Celere N. Leonard and La Toya M. Tittle.  The chapter has grown from 14 charter members to over 75 members within a short amount of time through recruitment, reclamation and retention of members.

Since 2003, Tau Eta Zeta Chapter has been busy serving the community, supporting National, Regional, State and Local initiatives and expanding its membership.  Some of the chapter’s accomplishments are listed below.

Tau Eta Zeta Chapter has partnered with many organizations over the years and continues to give back.  Annually in January, the chapter sponsors Heart for the Homeless, a clothing and toiletry drive for homeless men and women in downtown Baltimore.  Donations collected along with food are served directly to those in need.  In 2010, the Z-HOPE Day of Service event was born.  This is an annual service fair, held in March, where various vendors and healthy demonstrations are available to the community.  Also, the chapter hosts an annual Domestic Violence Seminar in February and HIV Awareness Program in December.  The chapter is passionate about these two issues and has recently adopted annual Mental Health Awareness activities for May.

The knowledge and skills possessed by chapter members will not only assist the sorority but they will also help THZ to continue to be a prominent force in the Baltimore community. For our 10th chapter anniversary, we adopted the slogan “Tenacious Hardworking and Zealous” which describes the dedication exemplified in the chapter.

Below is a picture of chapter members who hold the esteem honor of being the chapter’s Zeta of the Year for their dedication and hard work. 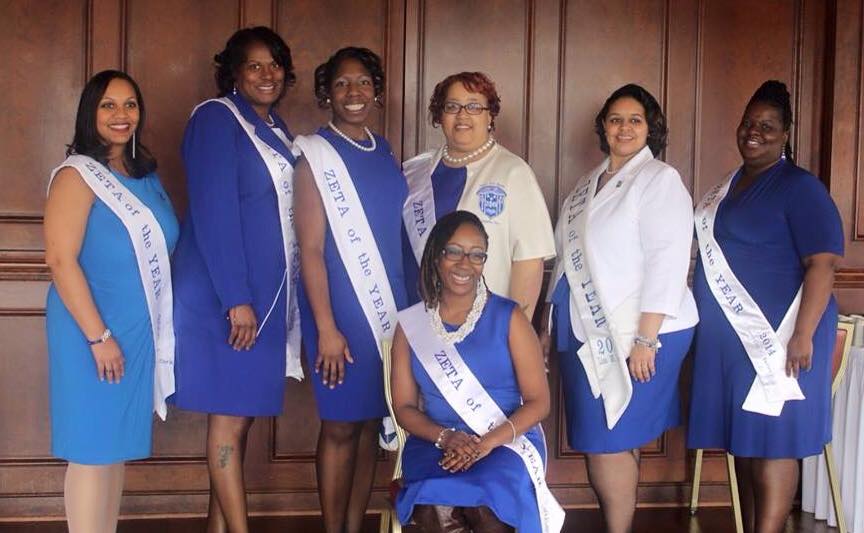